Oops the whole May went without any posts here (my apologies). I also try to forgive myself didn’t skate that much during the whole month. I was in my home country Finland, and it just was very hectic with seeing friends, family, working – and also the weather was very, very bad, even for Finnish spring: it was sleeting in mid May when arrived to Helsinki.

But when I did skate (that was once), it was with a style. This was my kit when heading to skate in the Vuosaari skate park in eastern Helsinki. It was also meeting up with a friend who had turned 40 whilst I’ve been away, and with whom had not yet celebrated my doctoral status. 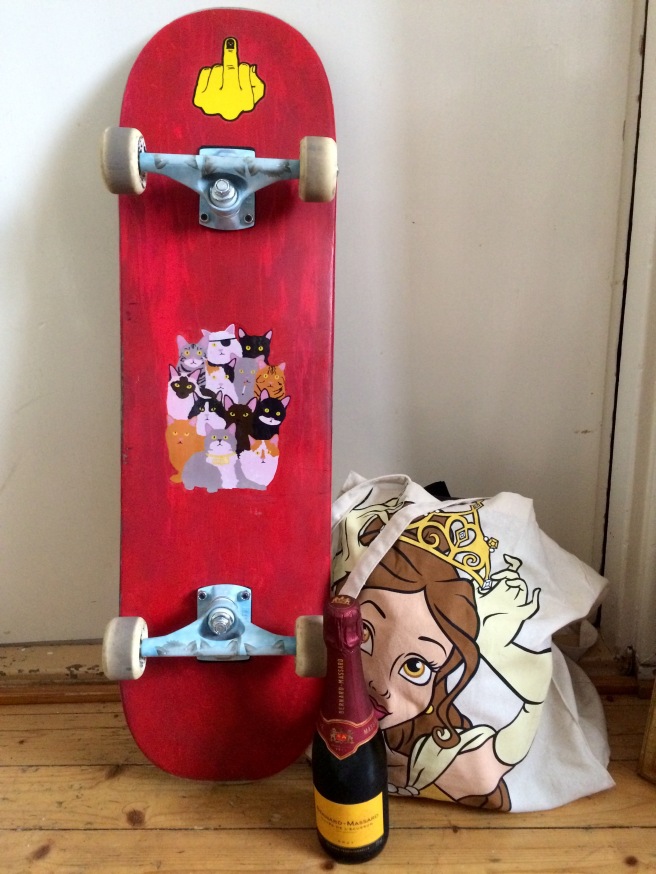 The session itself was not that great. Actually, was quite frustrated as last summer on the same spot was much better, but nevertheless it was super-nice to spend time with my friend, and also when it was getting dark-ish (I remind you, despite of cold spring, I was in a country of ‘nightless nights’) to hear birds, chat with some local skateboarders (I admired his skateboarding skills, he my job), to be worrying in a giddily way, if we’ll catch the last metro back to centre, and finally when there, to have some after midnight junk food before heading to my temporary home. 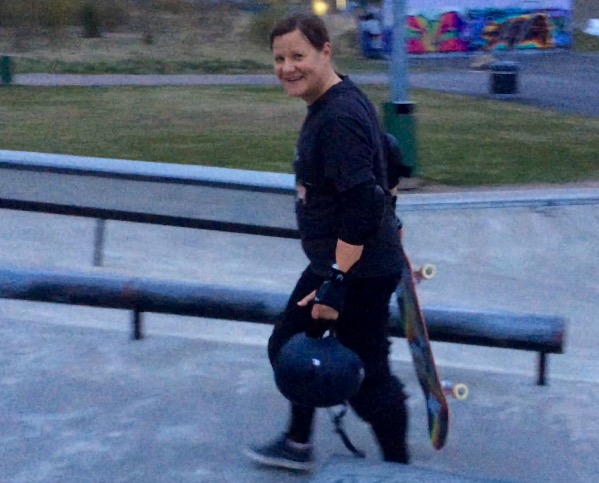 I also got some souvenir for myself to decorate my cat board. This sticker for Finnish skateboard brand Tikari is done by Katri Sipilä, a Finnish artist doing fab paintings, comic books, tattoos, skateboarding, designs skateboards.

And here is a souvenir for you. Finland is full of nice spots (erm, not necessarily legal to skate…), in summer there is LOT of light to skate all night long. So go skate there, go (just select carefully the time of the year) for your visit!

(ps. the sign says skateboarding is not allowed on terrace area.)

It feels like a looong time since I was in London, because the environment where I am at the moment, is so very different from the hectic city. I am doing a short-term artist residency programme in a small village in Belgium. Work takes most of my time, but managed to sneak out, and skate a bit in a Turnhout skatepark a few days ago.

The start wasn’t promising. I was very tired (this changing a place (too) often and working in a new place etc. is taking its toll) and was struggling again with the fear. Finally started to try out new things, and started to feel more comfortable, so rode in quite a good speed, as can be seen in this video.

More than conquering a new spot, I am happy of taking first steps with new tricks. These are:

Dear reader, I promise you, by the end of the summer, I will nail (or at least somehow manage) those!

During the skate session happened something I thought to open up, even though it is not really a big deal, but can’t believe it would happen if a) I would be a man b) I would be younger – and it does bother me a little; and similar things happens time to time (also when I am running). I was skating with my boyfriend, who was having a break and was sitting on the edges of the park, when a man (not skater himself) passing by with a dog joined him. Afterwards heard the man was commenting my skateboarding – and this is a bit that disturbs me. I do not mind advices , and I know part of the skateboarding is to be watched by others, but would he had done the same, if it would have been the opposite way: my boyfriend (well, a ‘real’ skater, but not a young one) skating and me sitting on the edges, and then to comment to me how he skates? I doubt that. And it annoyed me more than the pebble on the ground that made me fall off.

Hello from London! A city where I used to spend a lot of time and where I did my doctoral studies, but that was before I picked up skateboarding, so this time it is like exploring the whole new city.

And so far it has been fab! I am staying in South East London with an easy acces to Brixton and Stockwell skate park. I have now had four sessions there, and it has a place in my top three (or at leat five) skateparks I’ve been skating.

Stockwell, or Brixton Beach (opened in 1978) as it is also called, is perfect for surfing and for old school tricks – excatly the ones I was swearing to learn this year. Actually, in Stockwell I see skaters doing them. The skatepark with it’s undulating design is inviting for those moves. Also, it seems there are some ‘older’ skaters around familiar with the old skool style. It is clear I am in London, and the diversity of people living here can also be seen on skatepark.

Yesterday I actually had a short introduction for the old school turn  (thank you, you nice person showing me after I asked) – I don’t know the real name – the one where you put your back hand down, ‘front’ hand grabs the board, and you’re supposed to drag your back feet back so that you kind of do the 180 degree turn. To be honest, the only clue I got about it, is that I have to be very fast. Will definitetly practise that, maybe just in bit more calmer park.

Skateboarding really is a state of mind. As I wrote in earlier posts, I have been struggling with the fear issue recently. This week in London fear seems to be mostly away. I must say, it did take some courage to enter into the crowded Stockwell park. I also got bit intimidated on my first day when was told off from corner bit, as it “too dangerous”. I am not sure was that said for my safety, for other skaters safety, or just to scare me off, as I am slow and thus probably annoying (following carefully the rules, waiting my turn and looking what others do). But I didn’t go anywhere, and went back – and last Friday was the best skate sessions since last summer. Somehow all just went together, and felt very comfortable. It probably didn’t look much different than usual, but for the first time I felt like a skateboarder.  I found the flow, my space amongst others in the park – and just rode corners, lines, managed to kick turn (on mild bank).

If this feeling stays, I will try and ride down the steep bank in Stockwell. Just like all other skateboarders.